The all-new, fourth-generation Mazda MX-5 Miata’s long, slow march to dealerships has just spiked our excitement for the third time. The first jolt came when the car debuted, while the second arrived when we drove a European-spec car in Barcelona earlier this year. Now, the 2016 Miata’s price has been announced—and it’s mighty agreeable.

The new car may use more aluminum and high-strength steel (and pack more standard content) than before, but that hasn’t pushed its price much higher. At $25,735, the base 2016 Miata Sport model is just $945 more than the equivalent 2015 model and comes with a six-speed manual transmission, LED headlights, a leather-wrapped shift knob, a USB audio input, and Bluetooth connectivity.

The outgoing 2015 Miata Sport uses a five-speed manual, and a USB port, Bluetooth, or a leather-wrapped shift knob can’t even be ordered; in fact, a USB port isn’t available on any 2015 Miata, and Bluetooth comes standard only on the top-of-the-line Grand Touring. All of that, and Mazda says the 2016 MX-5 Miata is actually lighter than the old car. We’ll have to verify that with our own scales, of course, but the claim is at least promising. 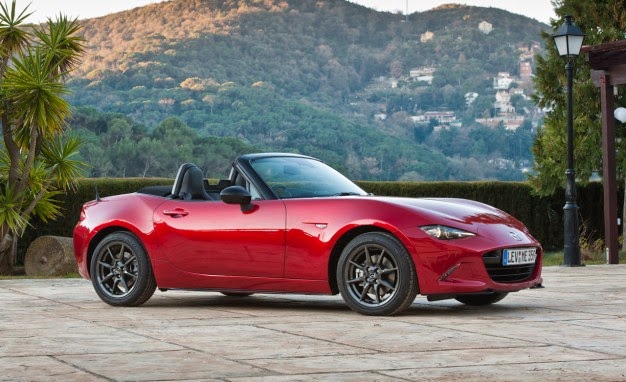 Posted by DeliveryMaxx at 5:19 PM